From a sociological standpoint, Spain's quite interesting.  A conservative country with Catholicism deeply rooted in the culture, as evidenced by the plurality of my students called Inmaculada, Lourdes, Carmen del Corpus and Santiago, Spain was nonetheless the third country in the world to legalise same-sex marriage over 10 years ago, well in advance of 'progressive' Australia.

In that vein, it's interesting to see the differences in gender roles here in Spain.  Strictly speaking, the traditional gender roles don't exist - it's quite common for both Mum and Dad to work, since both are home for lunch with the kids anyway - but other aspects of gender are much more binary and entrenched than their counterparts in Australia.

The very first thing I noticed in Spain was pierced ears.  Every woman has her ears pierced.  But not just women.  Even little girls, some just months old, lie in their prams in pink rompers with gold earrings.  It's like some kind of conspiracy (and makes me extremely glad I was NOT born in Spain!)

The cutesy doesn't end there.  Young siblings are often dressed in small matching outfits, especially little girls.  Said outfits are also often extremely non-weather-appropriate (think dresses in winter) in favour of being very, very cutesy. There's usually lots of bows, pink and ruffles involved in these outfits.  Also hats, stockings, scarves and any other accessory that can be made cutesy and feminine. 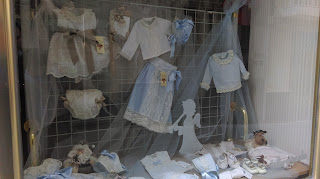 The most exaggerated version of this is in the outfits for confirmation.  Spain being Catholic and all, making one's confirmation in church is still a big thing, and there are entire stores dedicated to clothing for the special day, and not just for little kids either.  While the gold-trimmed sailor outfits and pink-sashed tulle dresses are cute as a button, they're also very, VERY gender-specific, and very, very common. 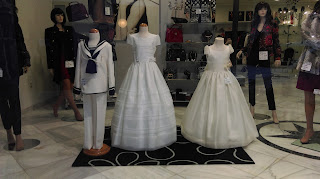 On the other hand, men in Spain are far more affectionate than they are in Anglophone countries.  While men giving the traditional besitos (kisses on the cheeks) is not as common as between two women, men here hug, link arms, lie across each other, and generally do a whole slew of things that would be shouted down as "Gay!" in other countries.  I'm not just talking about grown men, either.  I see this all the time at the high school amongst teenagers, who in Australia are most notorious for being insecure in their masculinity and least likely to be physical or affectionate with one another.  So, I guess Spain's gender binary is not all bad.
Posted by Caelli at 20:50