Spain's definitely a Catholic country.  You can tell every Sunday when all the people in town disappear to go to church.  You can tell when the biggest thing in town IS a church.  It stands to reason, therefore, that the biggest celebrations of the year would be the Catholic holidays - Christmas and Easter.  Well, I wrote about La Cabalgata de los Reyes Magos here in Baza last January, but that was nothing on the week that is Semana Santa - the death and resurrection of God's son, Jesus Christ.

The chief method of worship during Semana Santa, sometimes referred to in English as 'Holy Week', is the procesiones.  There were 11 of these during Baza over eight days, but larger cities like Seville can have as many as 60, sometimes going all night.  A procesión is basically a religious parade put on by one or multiple brotherhoods, paying homage to the central figure of that brotherhood.

To explain brotherhoods: here in Spain, you don't just worship Jesus Christ or the Virgin Mary - who, by the way, is even bit as big a deal as her son is, around here.  People also worship different aspects of the Virgin or Christ or those two figures at different points in the Bible story, known as imagenes - for example, there's Our Lady of Mercy, Our Lady of Sorrows, Our Lady of Hope, Christ of Love, Christ of the Resurrection, Christ of the Mendez (don't ask me about that last one, I have no idea).  People who are devotees of a particular imagen pay their yearly dues to the brotherhood to receive the newsletter, yearbook and medal of the imagen, and those devotees make up most of the people in each procesión (apparently you can pay a fee to participate if you're not a member but still want to join in).

Anyway, different brotherhoods will organise a procesión for their imagen, centred around a float depicting that imagen, known as a paso.  There's a fairly consistent structure for a procesión.  At the front will be a penitente, a penitent devotee of the brotherhood, garbed in the flowing cloak and pointed capirote hat that we've all seen on TV and mistaken for the KKK, carrying a large ornate metal cross. 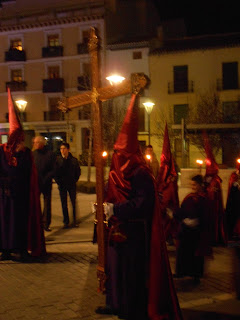 Following them will be a series of children, clad in the same robes but bare-headed, often carrying a series of small crosses roped together in a string, and passing out lollies to children in the crowd. 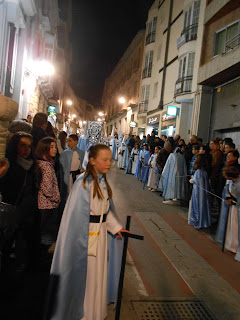 Behind the children come the rest of the adult penitentes, wearing the pointed capirotes and carrying tall candles. 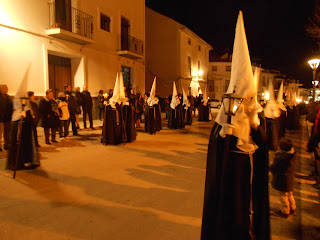 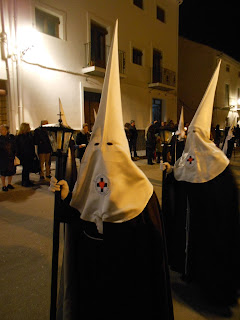 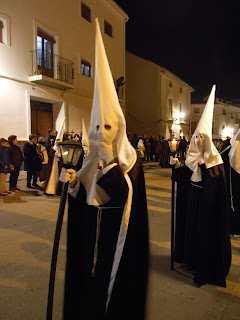 Each brotherhood has a different pair of colours represented in their capes, capirotes and belts or sashes. 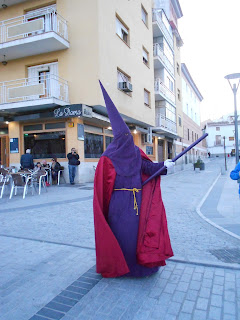 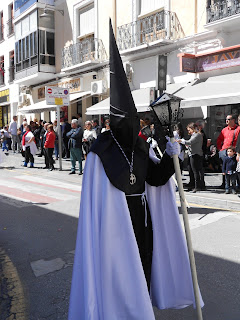 The final penitente carries an ornate book that I believe has to do with their imagen. 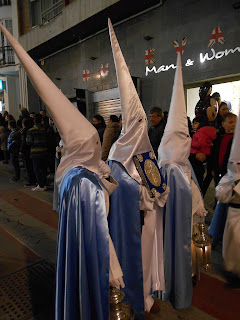 Next are a set of female penitentes known as manolas, ranging in age from about 4 to 70, dressed all in black dresses or skirts, and with a long black lace mantilla flowing from a headpiece down to their ankles, who symbolically share the sorrow of the Virgin at the death of her son Jesus. 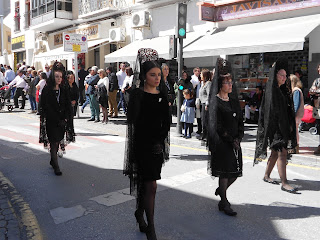 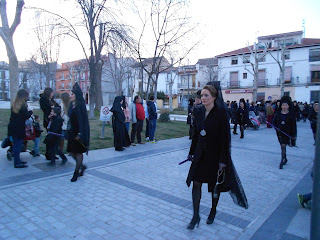 Next there are often some dignitaries or senior members of the brotherhood, dressed formally in suits and with their brotherhood medals hanging prominently around their necks. 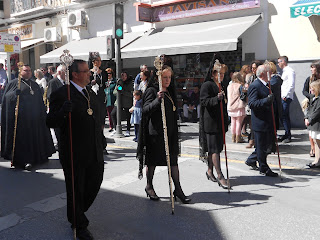 Behind them come a group of altar boys and girls, some carrying wicker baskets and others carrying censers of burning incense to 'purify' the path of the paso. 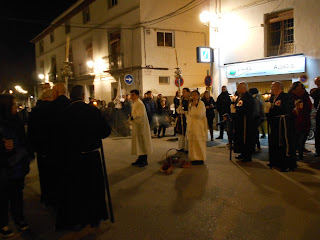 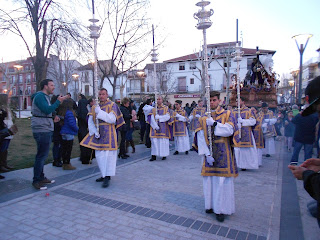 Finally, the main point of the procesión, a large wooden or gilded 'float' called a paso with some depiction of Jesus or Mary, elaborately carved and garbed and surrounded by fresh flowers.  This is carried on the shoulders of 30 or 40 of the burliest men in the brotherhood, who are very well-rehearsed at marching in slow unison. 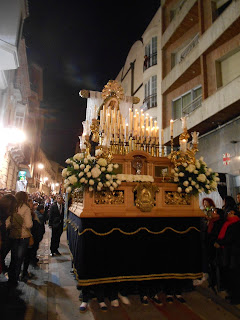 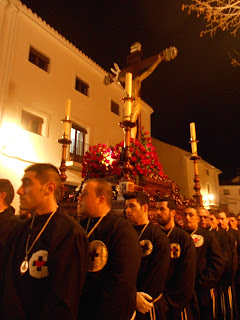 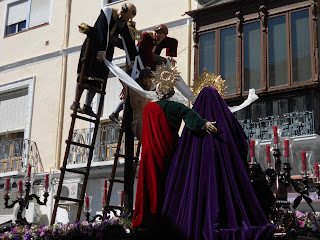 Bringing up the rear of the procesión is the band, a different one for each procesión, which plays on and off throughout the procession and whose drummers play continuously to set the marching pace for the paso-bearers. 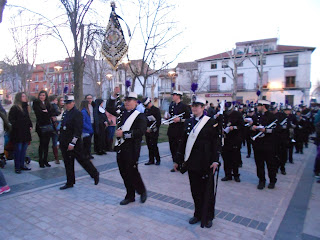 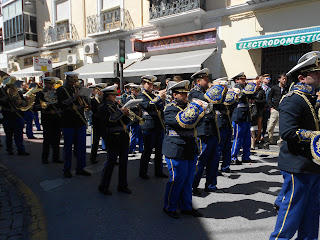 Of course, not every procesión is identical.  One featured a barefoot penitente marching behind the paso, carrying a large wooden cross. 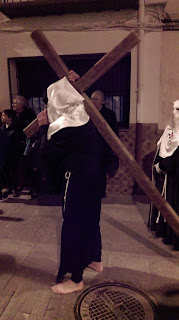 Others featured female penitentes behind the paso with chains around their ankles dragging behind them. 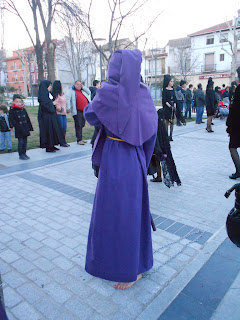 The procesión of Our Lady of Hope (Nuestra Señora de la Esperanza) fired hundreds of flower petals over the crowd.  Perhaps the most interesting was the procesión of the Cristo Resucitado - the Resurrected Christ, a much smaller paso that was carried entirely by children, and preceded by the young penitentes of every other procesión held throughout the week. The other interesting phenomenon that I saw twice occurred when two different pasos, one of Mary and one of Jesus, were both in procesiones at the same time, sometimes in the same procesión.  One of the pasos would turn to face the other, then, in a sign of respect, the bearers of the paso featuring Jesus would lift the paso above their heads with both hands.  It was both cool and surreal at the same time.
I would love to post a hundred more photos of Semana Santa - I honestly took about 500 - but I don't have a spare week to go through them all!

The best part of the week for me was that I had students in almost every single procesión, which made it very personal for me - though since at least some of those students were wearing capirotes, I have no idea who they were!
Posted by Caelli at 18:35