One of the interesting things about moving to another country is ferreting out all quirks that make their culture THEIR culture and different to everyone else's culture - what makes them them, so to speak.  Spain has a surprising number for a country that's supposedly so closely allied, linguistically at least, to the rest of Western Europe.  I'll save most of them for another time, though.  There's plenty of it here; Spain has the weirdest relationship with time I've ever seen.

To begin with, they've completely restructured their days in a fashion that makes every other country in the world look at them askance.  The day here begins at 8:15am - that's when school starts.  Government offices and services like the bank and post office open at 8:30am, and business follow suit from then until about 10am.  For a country with a reputation for late nights, they sure are up and at 'em earlier than any country I know. 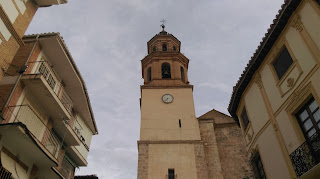 The really quirky part kicks in at 2pm.  Every business closes, every government bureau shuts, and they all go home for the Spanish seista.  Wandering around Baza in the early afternoon is like being in a ghost town.  I think of it as 'the twilight zone' - the weird, dead period of time between morning and afternoon (yes, 'morning' in Spain seems to cover the period right up until early afternoon, while tarde goes from 5pm up til 9 or 10pm, and in between 'mañana' and 'tarde' is simply 'siesta').  There's absolutely no-one in the streets - that is, until 2:45pm, when the high schools let out for the day.  These kids haven't eaten since their bocadillo sandwich in their half-hour morning break, because the Spanish won't even consider eating lunch before 2pm.  The kids all hurry home and families enjoy a nice, leisurely midday meal together.

Most shops open again after lunch at 5pm.  The true running of the bulls in Spain is the sudden appearance of the entire local population as soon as siesta ends.  It's like they're released from some invisible pen somewhere and spill onto the streets, eager to spend money, greet friends, run errands, eat and drink a lot, or simply mingle with no-one and everyone in particular.  If you go for a walk around 7pm, there's more happening than the rest of the day combined.  This does have its advantages.  For those, like teachers, who work in the morning, they still have plenty of time in the afternoon to buy the groceries, pop in and pay the phone bill, or even just do a little clothes shopping (though it's not so helpful if you need to go to the post office!)  Dinner is anywhere from 8pm to midnight.  I still can't get my head around how this country can leave the lights on til 12am and still get kids out of bed earlier than every other country.  Do they pour coffee down their ears or something?

What's even more interesting is that this entire work week is built around seista, which is an old Spanish tradition not born of laziness but of the desire for a leisurely familial midday meal each day, and even though it's no longer really practical to pop home for three hours midday to eat, the custom persists.  Believe me when I say, these guys can really take their time over a meal.  These days, in a larger city, it's not too hard to find places that are open all afternoon, but in a small town like Baza, family is still important.

Saturdays and Sundays are a law unto themselves.  All the shops, though not the services, are open Saturday mornings and, especially when it's sunny, there's this lovely convivial atmosphere as you wander round town, getting brunch with friends, window-shopping or running errands.  Then at 2pm everything shuts up tight as a clam again.  No Saturday night fever round here!  Sundays are apparently a family day around here, though I can't vouch for that, because you pretty much don't see anyone on Sundays.  I go out walking or bike riding most weekends, and I have wondered on occasion if a bio-weapon has wiped out Baza and I'm the last human on earth.  No, really.  Everything's so quiet!

This relaxed familiarity around time has led to other cultural traits as well.  My yoga teacher has taken to locking the studio door when classes start in an attempt to train her students to arrive on time (the Spaniards are also terribly disorganised as well as frequently late, but that's another story).  In fact, coming home from Granada last weekend, my bus, another bus, a couple of cars and half a dozen taxis were held up for a good quarter-hour when an old woman who just missed our bus waylaid us just outside the station and sat down in the middle of the road in front of the bus when the driver refused to let her on.  Talk about local colour!